The Old Bank Building is one of Wellington’s most famous landmarks. 2001 marks the hundred-year anniversary of this magnificent building – a testament as much to the architecture of John Turnbull and the original builders as it is to the incredible restoration work that has seen the Old Bank return to its former glory. A trip to the Old Bank is not just a retail thrill – it’s a chance to experience a world of history and style that transcends the ages.

I was born in England in 1812, a few days before Napoleon invaded Russia. Napoleon, who of course met his Waterloo three years later at the hands of the Duke Of Wellington! Wellington. A great man, who gave his name to a great city!

I arrived in Wellington on the 31st of October, 1841, with my wife Eliza and my 4 children. I was to have 11 eventually. 11! Not quite as good as my parents who had 12, but then perhaps I was a little busy. We arrived on the good ship Gertrude after making spectacular speed from England. Only 4 and a half months. Extraordinary. 163 settlers on that boat. Four had died on the way over but then three were born so it sort of evened itself out.

Now I want you to imagine the scene as we arrived, a beautiful spring day, the blue seas, the blue sky, bluer than anything we could ever have imagined. And the vast beautiful harbour, almost land locked, with great forests spilling down right to the waters edge. It was paradise. I loved it immediately. This was where I was going to make not only a lot of money but a name for myself in history! 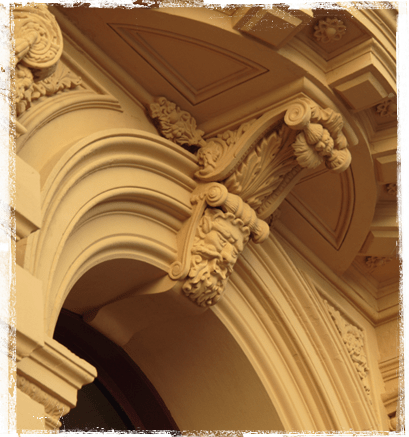 If we had arrived a little earlier we would have gone to Petone, which was to be called Brittania, it was the only decent flat land around, but the jolly river kept flooding so the settlers had moved to this area, and called it Wellington. 3000 of them already by then. But there was very little flat land. A major problem which was to be fixed ingenuously!

Picture the scene. A narrow strip of beach running right along here, a line of raggle taggle wooden buildings, shacks! But from those shacks pioneering spirits were already trading and selling and carving a future. Merchants – the life blood of any civilisation.

Steep bush clad hills rising directly above and behind these shacks. The clatter of horses pulling carts, the sounds of birds everywhere. The water lapping or in a high wind pounding against the rocks. In a good Wellington wind the water could go right into the buildings! See the women in their crinolines, desperately trying to raise them high enough not to get muddy. The smell of drying seaweed, fish guts, storm waters and goodness knows what else pouring out in little streams into the harbor.

And rising above it all just over here a huge clay promontory. Clay Point, sometimes known as windy point. This clay bank divided the city into two. All along there, north, the swerve and curve of the beach until it reaches the gentle slopes of Thorndon, and down there, south the gentle beach but almost impassible swamps of Te Aro. Charles Heaphy sat on top of that great promontory and painted his sketches of early Wellington, as many artists were to do.

So, a magnificent setting, but little land and steep thickly forested hills all around. However this didn’t put anyone off! My first year I spent in a log cabin I built myself for my family. There was so much work to be had, for any one hard working and enterprising and I certainly was!! I came from good stock, my grandmother lived till 104! And I had been a builder in England. After a year of doing well, we moved right here, the heart of the city. I built a lime kiln just there and a brick building to live in before I built another up behind it on the hill with a great view.

And next to this house was the track that took people to Boulcoutt street. Because you have to realise, the little track at the base of Clay Point was almost impassible in a high tide and a strong wind. People wanting to get to Te Aro had to go up my path, which I turned into steps and this became called Plimmer’s Steps!

Eventually I decided I needed to make the unloading of goods off the ships better and easier. I needed a wharf of my own. And suddenly one day I had a brainwave. Lying on the shore of Te Aro, derelict and forlorn was the good ship Inconstant.

Now, this is what you’ll all be interested in. The Inconstant was a ship of about 600 tons, built out of strong teak or birch, we were never quite sure. In 1849 it was on its way from Adelaide to Callao in Peru when it needed suddenly to call into Wellington for some fresh water. It was making its way up through the heads in a stiff northerly and starting drifting towards the rocks on the eastern side of the harbour. Now no one knows what happened next, there were some rumors a bout the crew being a bit mutinous because the sails weren’t being manned properly and so eventually the ship smashed on to the rocks at a place now known as Inconstant point. She was stuck fast.

Luckily the surveying ship HMS Acheron was in the harbour and raced to the rescue. They managed to get the Inconstant off the rocks and towed her over here and beached her at Te Aro till they decided if they could repair her or not. Well it just stayed there for months! The captain told me later, after a few too many drinks at Barretts one night, that they did it on purpose, because the insurance was worth twice what the ship was worth!. Well I don’t know about that but I decided to buy it! It was just lying there getting buried slowly by drift sand.

All was signed and sealed but there were incredible delays getting it delivered to the site I’d prepared, just here! I soon found out that the merchants of Te Aro didn’t want it moved over here, because they could see it was going to be a great boon to this part of the town. They didn’t have a wharf of any sort you see. Well I soon put a stop to this! I paid an American whaler which was in port to do the job and they didn’t muck around. It took five days, with pump working flat out to keep it afloat, but we got it here and in a few months I’d stripped the top bits off and built a flat deck for the wharf and two new big buildings on it. One of which was leased by a Mr. James Smith! He did well. The boat was about 70 feet by 30 feet. The end of the wharf was in about 10 feet of water. Good enough for smallish vessels to moor along side. I had a little crane built for unloading them. The first harbour light in Wellington went on the end and the harbour master had his first office on my wharf. Plimmer’s wharf opened in 1851. James smith had a big luncheon party for the opening of his premises, probably the first proper business lunch!

Some wag at Barretts one night said it looked like Noah’s Ark from the Bible and the name stuck. Noah’s Ark, or just The Ark, or Plimmers Wharf was a very unusual and special sight in Wellington for many years.

In 1855 nature gave a blessing to Wellington, a big tremor raised the land all around the harbour, we could build a proper road to Lower Hutt, the Te Aro swamps drained. Marvelous! But suddenly the 10 feet at the end of my wharf was reduced to about 4! I had to build another jetty out about 200 feet! But fortuitously suddenly I realised my next dream. I built timber frameworks from the end of the Ark to right over there and right over there, and it was all filled in with spoil from Clay Point. The first reclamations had started. Of course the Inconstant was buried but a small price for progress. Of course this started a trend and soon this whole area was reclaimed and then much of the foreshore of Te Aro was filled in and huge areas north of Thorndon. I tell you it was all go.

I had warehouses and bond stores and auction rooms. I was involved In hotels, you name it. I was on the Provincial Government and in 1870 I’d only just been elected to the Wellington Board of Works when it became the city council when Wellington finally achieved city status.

My last major feat was helping getting the railway built to Manawatu. Me and 12 other prominent business raised of a million pounds and carried on that railway where the government had left off because they found it too tough! But Wellington had to have access to its hinterland to grow and prosper. Which of course it did. In 1886 that railway was complete. A number of us directors had settlements named after us and I was thrilled with Plimmerton. I spent a lot of time out there in my declining years.

But my energy never waned, even after Eliza’s tragic death. And in 1899 I was photographed down here in this very place next to the newly dug up remains of the Inconstant. The timbers had been perfectly preserved! Amazing. They even made some chairs out of some of the wood, which are still about. They were found when the BNZ was clearing this bit of land to build there new bank building. John Turnbull had designed a superb edifice and my goodness when I look around today and see what a magnificent restoration has been done on it, I have to feel a pang of envy for anyone about to start or continue their merchant life in such fine accommodation.

I made my fortune in Wellington, and I gave a lot back to it I hope. But if I was starting again, this is the exact place for me. The heart of the city. I chose this spot then and I would choose it again. This is the place to get rich in. Flair, energy, hard work, enterprise, and a sense of humour. All the ingredients you need for a wonderful life. Well I’ve done my dash. Over to you. I’ll come back in another hundred years and see how you’ve got on. I expect I’ll see a few changes, and a lot of very happy people! Good bye.